As Paris is a city which is widely associated with glamour, it has five star hotels to please any taste. Converted historical palaces, gleaming modern accomodations, and cozy boutique hotels are scattered thoughout the city. Whether you’re visiting Paris for shopping, visiting its museums and landmarks, or for business reasons, there’s probably a luxury hotel to relax in within a few blocks.

Castille Paris: A boutique five star hotel next to the Maison Chanel on the rue Cambon, a quiet side street off of the rue de Rivoli. The Jardin des Tuileries and the Musee du Jeu de Palme are at the end of the street.

Grand Hotel du Palais Royal: One of the closest five star hotels to the Louvre and the Comedie Francaise.

Hotel Le Meurice: The Hotel Le Meurice is the oldest luxury hotel in Paris, dating back to 1835 at its current location on the Rue de Rivoli across the street from the Jardin des Tuileries. Other nearby attractions are the Louvre, the Place de la Concorde, and the Place Vendome. 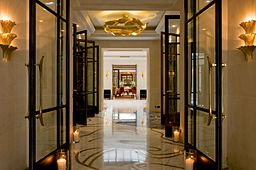 Le Burgundy Paris: The Le Burgundy is in the Place-Vendome area and within walking distance of the Champs-Elysées, the rue Saint Honore, and the Jardin des Tuileries. 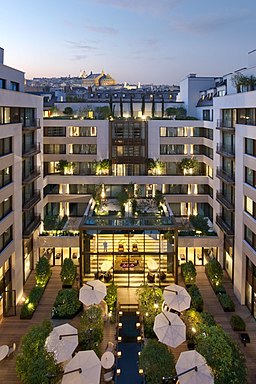 Mandarin Oriental Paris: One of Paris’ younger 5-star hotels, the Mandarin Oriental opened in 2011 and is located just steps from the Place Vendome. Amongst the room offerings are a three-bedroom penthouse suite with two terraces and its own private gym, and a duplex suite with an upstairs bedroom.

Nolinski Paris: As it just opened in July 2016, the Nolinski Paris is one of Paris’ youngest 5-star hotels. It’s within easy walking distance of the Musee de l’Orangerie, the Louvre, and the Jardin des Tuileries, amongst other attractions. 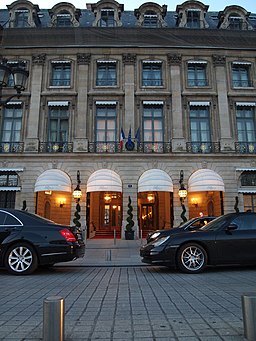 Ritz Paris: One of the Leading Hotels of the World, the Ritz Paris is located right on the Place Vendome and a few steps from Notre Dame Cathedral.

Park Hyatt Paris Vendome: This Hyatt location is within walking distance of the Louvre, the Place Vendome, and the Opera House. It has four restaurants, one of which is located in a courtyard. Amongst its accomodation offerings are 43 suites, including 3 Presidential Suites. The Vendome, Presidential, and Imperiale Suites include a Jacuzzi and at least one balcony. The Presidential and Imperiale Suites also come with a private gym, spa, and kitchenette.

Hotel Bel Ami: The artsy and modern Hotel Bel Ami is in the Saint Germain area and is within walking distance of the Louvre and the Latin Quarter. 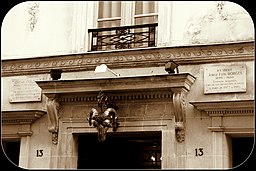 L’Hotel: A historic hotel in the Saint-Germain area which is famous as the hotel where Oscar Wilde died. It’s within walking distance of the Louvre, the Musee d’Orsay, and Notre Dame cathedral. 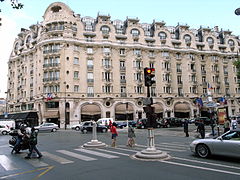 Hotel Lutetia: The historic Hotel Lutetia is within walking distance of Le Bon Marche, which is one of the first department stores that ever opened and is considered to be one of the best in France. Across the street from Le Bon Marche is the gourmet grocery store La Grand Epicerie de Paris. La Grande Epicerie has a wide assortment of foods from all over France. It’s an especially good place for wine lovers, as it offers an assortment of 6,500 varieties.

Four Seasons Hotel George V: This magnificent 5-star hotel is just around the corner from the Champs-Elysees and the Golden Triangle, which houses boutiques like Louis Vuitton, Chanel, Gucci, and Dior. Some of the rooms offer a good view of the Eiffel Tower. 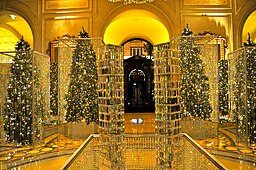 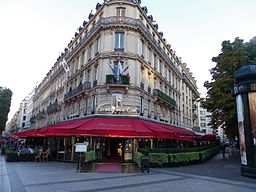 Hotel Barriere Le Fouquet’s: Located right on the corner of the Champs-Elysees and Avenue George V. One of its three restaurants is the famous Fouquet’s, which serves gourmet French food.

Hotel de Sers: This contemporary hotel is only a few minutes walk from the Champs-Elysees. Amongst its room offerings is a seventh-floor apartment with two terraces which starts at 1799 euros.

The Hotel du Collectionneur: A 10-minute walk from the Arc de Triomphe and the Champs-Elysees.

Hotel Lancaster: Having been converted into a hotel from a mansion, the Hotel Lancaster combines the amenities of a luxury hotel with the atmosphere of a private home. It’s located just off of the Champs-Elysees near the intersection with the Avenue George V.

Hotel Le Bristol Paris: This hotel often has world leaders as guests, as it’s in the next block from Elysee Palace. The Le Bristol offers some of the largest rooms and suites in Paris, including a Terrace Suite with a Jacuzzi. 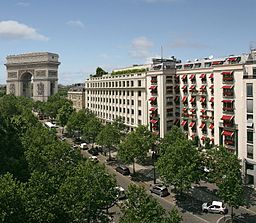 Hotel Napoleon Paris: The Hotel Napoleon is practically right next door to the Arc de Triomphe. Its rooms and suites are decorated with comfy furnishings reminiscent of Napoleon’s era.

Hotel San Regis: One of Paris’ cozier luxury hotels, the Hotel San Regis is housed in a 19th century mansion on a quiet side street near the Golden Triangle, Grand Palais, and Petit Palais. It’s restaurant, Les Confidances du San Regis, offers French food under a glass-covered courtyard and seating on comfortable sofa-like benches. The accomodations include a two-bedroom suite which would be suitable for a family traveling together. If you want a room with a view of the Eiffel Tower, it can be had from the balcony of the deluxe junior suite.

La Tremoille: The La Tremoille is housed in a 19th century building that has been serving as a hotel since 1925. It’s less than a mile from the Eiffel Tower and the Arc de Triomphe. 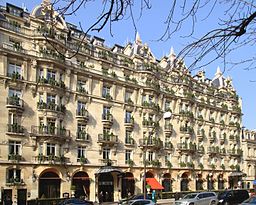 Plaza Athenee: Located in Paris’ Golden Triangle on the Avenue Montaigne, the Plaza Athenee might be a good choice for those who are on a shopping trip in Paris. This hotel is just a few steps away from fashion boutiques like Dior, Chanel, Fendi, Versace, Louis Vuitton, and Armani. The hotel’s five restaurants include offerings like French cuisine and fancy pastry, along with a bar. Along with a fitness center and Dior spa, there’s an ice skating rink during the winter. The room offerings include views of the Eiffel Tower and views over the courtyard restaurant, which is surrounded by ivy-covered walls.

Sofitel Paris le Faubourg: A cozy hotel in a quiet side street which os just around the corner from the Place de la Concorde, Jardin des Tuileries, Musee de l’Orangerie, Musee du Jeu de Palme, and across the river from the Musee d’Orsay. 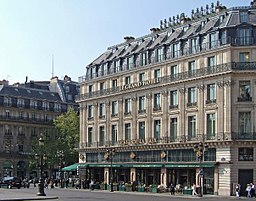 InterContinental Paris le Grand Hotel: This historic hotel is 30 meters from the Palais Garnier which houses the Paris Opera.

W Paris Opera: Housed in a 19th century bank, the W Paris Opera is located right across the street from the Palais Garnier. Other attractions within walking distance are the Galeries Lafayette department store and the Fragonard Musee du Parfum.

Majestic Hotel Spa: The rue La Perouse is just around thr corner from the Arc de Triomphe, and the Champs-Elysees. The Eiffel Tower is a 15-minute walk away.

Molitor Paris: The Molitor surrounds a large outdoor swimming pool which is part of the outside view of most of the rooms. There’s also an indoor swimming pool and a large spa offering yoga classes. It’s within walking distance of the Roland Garros Stadium, the Parc des Princes Stadium, and the Bois de Boulogne.

The Peninsula Paris: This 5 star hotel is housed in a building which was previously known as the Hotel Majestic. It’s located on the Avenue Kleber, which is one of the streets that radiates out from the Arc de Triomphe, just around the corner from the Champs-Elysees. The room offerings include rooftop terrace suites with views of the Eiffel Tower, along with suites with formal dining rooms and even a piano. 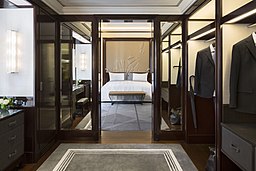 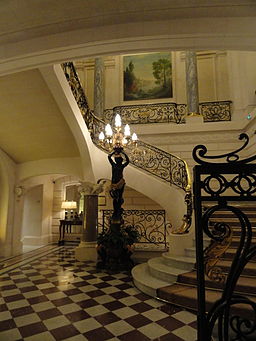 Shangri-La Hotel Paris: The Shangri-La is housed in the former home of Roland Bonaparte and is located near the Jardins du Trocadero. 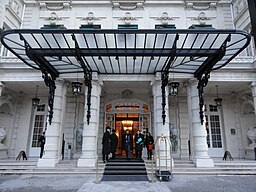 Chantilly is a quiet town which is located 24 miles (38 km) from Paris. It can serve equally well as a base from which to visit Paris, or as a destination on its own. The Chateau de Chantilly contains one of the largest art galleries in France, and there are also a number of tourist attractions related to horse racing.

Tiara Chateau Hotel Mont Royal Chantilly: A large chateau surrounded by a forest is home to this five-star hotel.

La Defense is a business complex of skyscrapers right outside of Paris. Some of the companies which are based there include Total and Aventis.

Sofitel Paris La Defense: This Sofitel location is right in the La Defense complex and is only a few steps from the Esplanade de la Defense metro station.